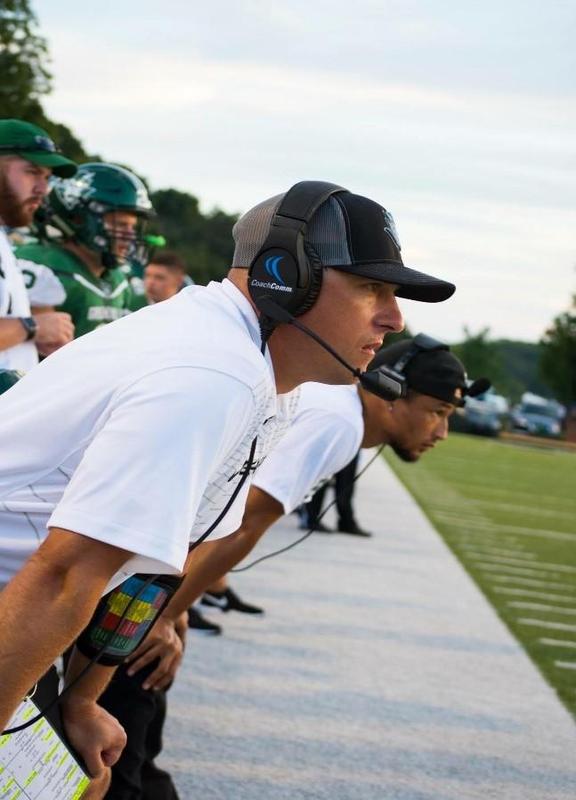 Coach Spradlen graduated from Tusculum College in 2004 with a bachelor’s degree in Physical Education.  While at Tusculum, he was a four-year letterman in football and a member of the 2003 South Atlantic Conference championship team.  He continued his education at Lincoln Memorial University earning a Master’s in Education in 2009 and later received an Educational Specialist degree in 2011. Coach Spradlen has been on staff with the Greene Devils serving as a PE teacher, as well as serving in various roles as a position coach, special teams coordinator, and defensive coordinator for thirteen seasons.  The Greene Devils have won four state championships and twelve conference championships during his tenure.  He also spent three seasons coaching at South Doyle High School.  On June 8, 2020, he was named interim head coach.  Coach Spradlen has a passion for student athletes and their total development and is looking forward to continuing the success of Greene Devil football.  Coach Spradlen was quoted as saying, “I’m honored to be able to continue to serve this community, our school, our student athletes and this football program in the capacity of head football coach.  I look forward to continuing the legacy and culture of the Greene Devil football program that was built by the hard work and dedication of many Greene Devils.  Together, through relentless effort, we will continue to be successful both on and off the field.”

Greeneville High School principal Patrick Fraley commented “Since beginning this process, the committee has been focused on finding the correct person to carry on the success of our program in its entirety. Factoring in the academic, character development, leadership, and athletic sides of the equation, we feel that we have accomplished this with the promotion of Coach Spradlen.  He has served our community, school and players for many years and knows very well what the Greene Devil Standard is and what that culture entails. The process was very thorough with some excellent candidates, we have the utmost confidence that Coach Spradlen is ready, willing, and able to keep moving the Greene Devils forward toward continued success. He responded wonderfully in the two weeks he served as interim, doing an excellent job at motivating our student athletes to continue their hard work, control what they could control, and keep their focus on preparing for the upcoming season”

Director of Greeneville City Schools Steve Starnes added, “Coach Spradlen has been an integral part of building the Greene Devil Football program into the successful championship caliber program that it is today. Coach Spradlen’s energy, enthusiasm, leadership, and passion for Greene Devil Football distinguished him from the strong group of applicants. He has developed strong relationships with the players and coaches and is a valued member of the GHS faculty. We believe that Eddie will not only continue the rich tradition of excellence that has been established within the program, but that he will build upon it as well. We are excited for the future of Greene Devil Football.”

Greeneville High Athletic Director Brad Woolsey said “Eddie Spradlen has been a central cog in the success of the Greene Devil football program over the last decade.  His energy, passion, and love for the kids, the game, and the community were always on display as an assistant coach.  We are now excited to have him lead our football program as head coach.”

Coach Spradlen, Mr. Fraley, and Coach Woolsey will meet next week with the football staff and team to discuss the decision with them. The team will return to workouts on July 6th at the conclusion of the TSSAA mandated Dead Period.